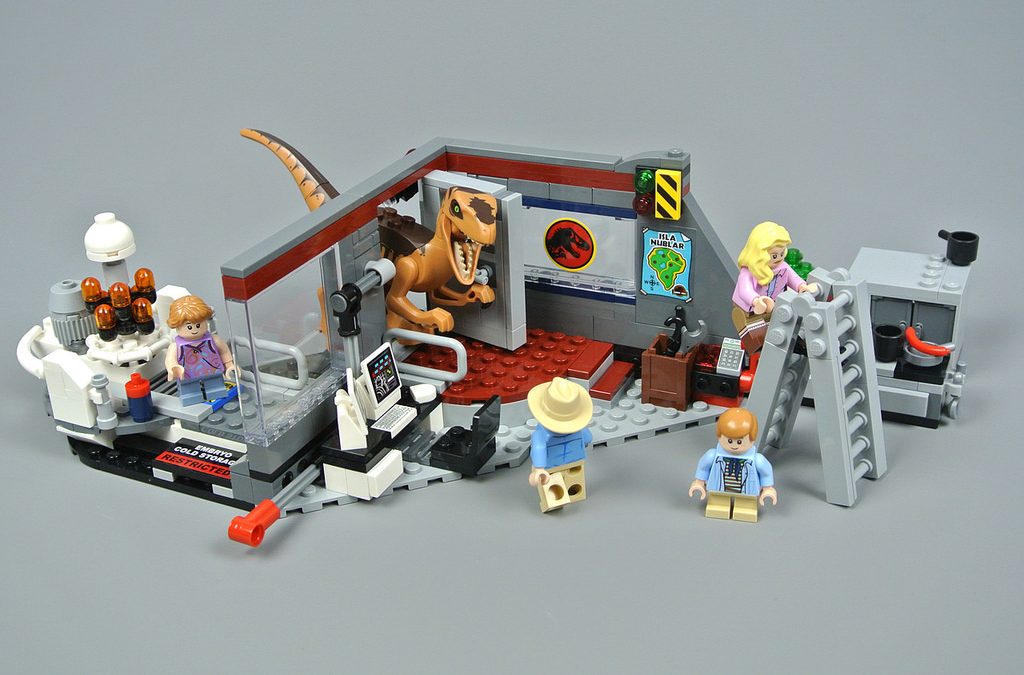 The 1993 Steven Spielberg classic gets a LEGO makeover. Following in a wave of sets adorning the latest sequel Jurassic World: Fallen Kingdom, LEGO released the set Jurassic Park Velociraptor Chase (75392) just in time for the original Jurassic Park’s 25th anniversary. This set, celebrating a piece of iconic cinematography includes 360 pieces total, and is available for $39.99 USD from LEGO.

As mentioned previously, this set released among a line of sets promoting the latest film, Jurassic World: Fallen Kingdom, so the box art relatively has the same layout as the rest of the theme. The top right of box bares the new film’s silver logo. However, the box art does give a nod to Jurassic World’s origins with an image of the film’s iconic double doors. The box art also leaves Owen, Chris Pratt’s character from the Jurassic World films, out of the picture. And the original blue/green Velociraptor is more brown/yellow. Inside of the box LEGO provides three numbered bags, a bag with the contents for the velociraptor, three Technic beams, a sticker sheet, and two instruction manuals. 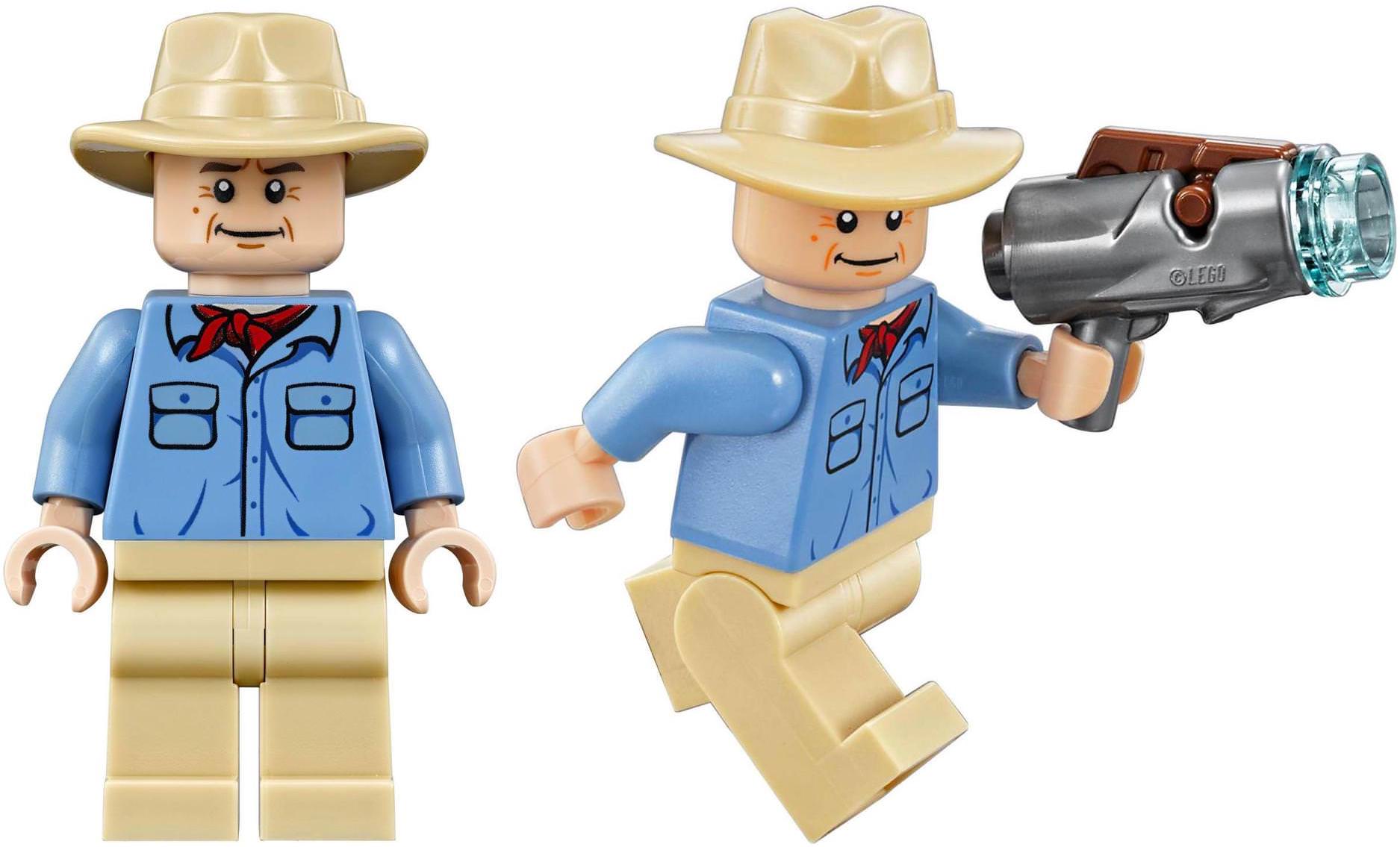 The first minifigure of four in the set is of paleontologist, Dr. Alan Grant. This main protagonist is played by actor Sam Neil in the original Jurassic Park. LEGO does a fantastic job with the minifigure. His iconic fedora, red neckerchief, blue-jean button-up shirt, and tan work pants combination are unmistakable. He also comes with an alternate brown hairpiece and a pearl silver stud shooter, which launches 1×1 round transparent, light-blue pieces. 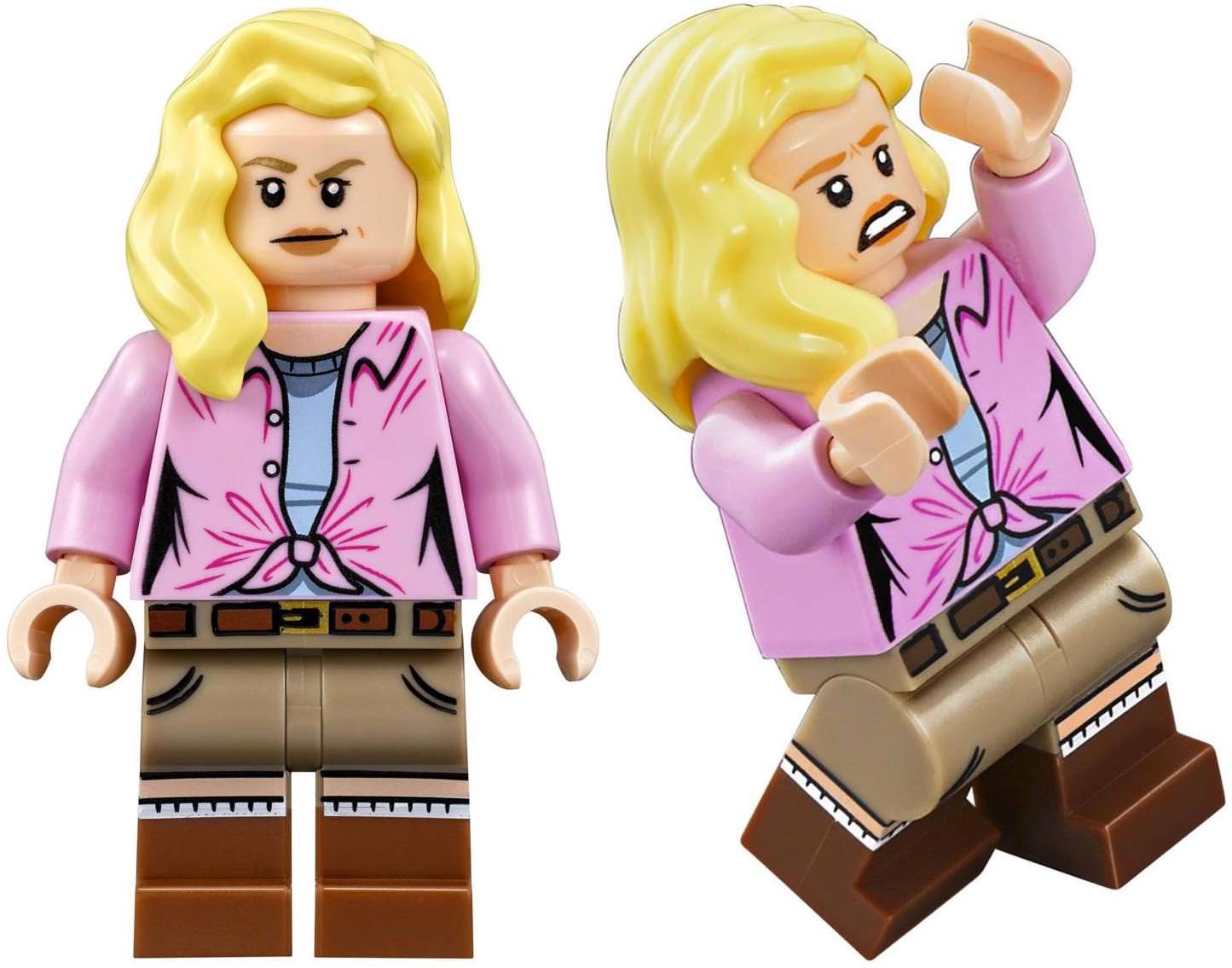 Just like Dr. Alan Grant’s, the minifigure’s likeness to Dr. Ellie Sattler is unquestionable. LEGO gets her distinctive outfit just right. She dons the pink button-up shirt, lavender undershirt, belt, tan shorts, and brown boots. Even the long, wavy, yellow hair piece captures Laura Dern’s portrayal very nicely. Although, Dr. Sattler no longer wears her pink shirt during the Velociraptor attack scene, it was a great inclusion to the minifigure’s final print. This minifigure also comes with two face prints, the other expression more frightened. The pair of paleontologists are well defined. 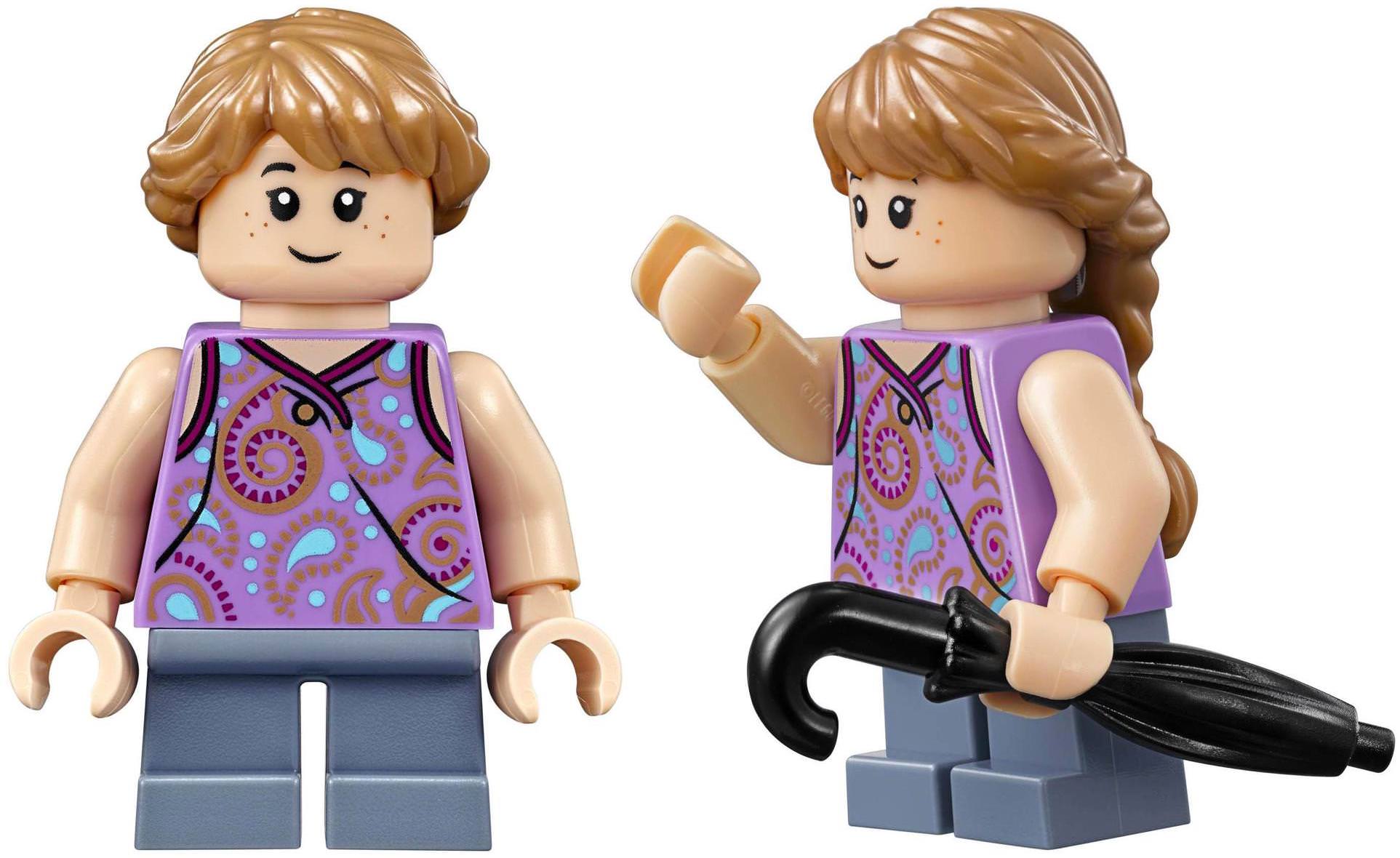 Our third minifigure up is Lex Murphy. Lex wears her purple tank-top with the unique design printed on her front and back. She also sports sand blue short legs. Her hair piece comes in brown and is tied in the back just like in the original film. Lex’s also has two face prints with different expressions. One is a smile, and the other is a frown. 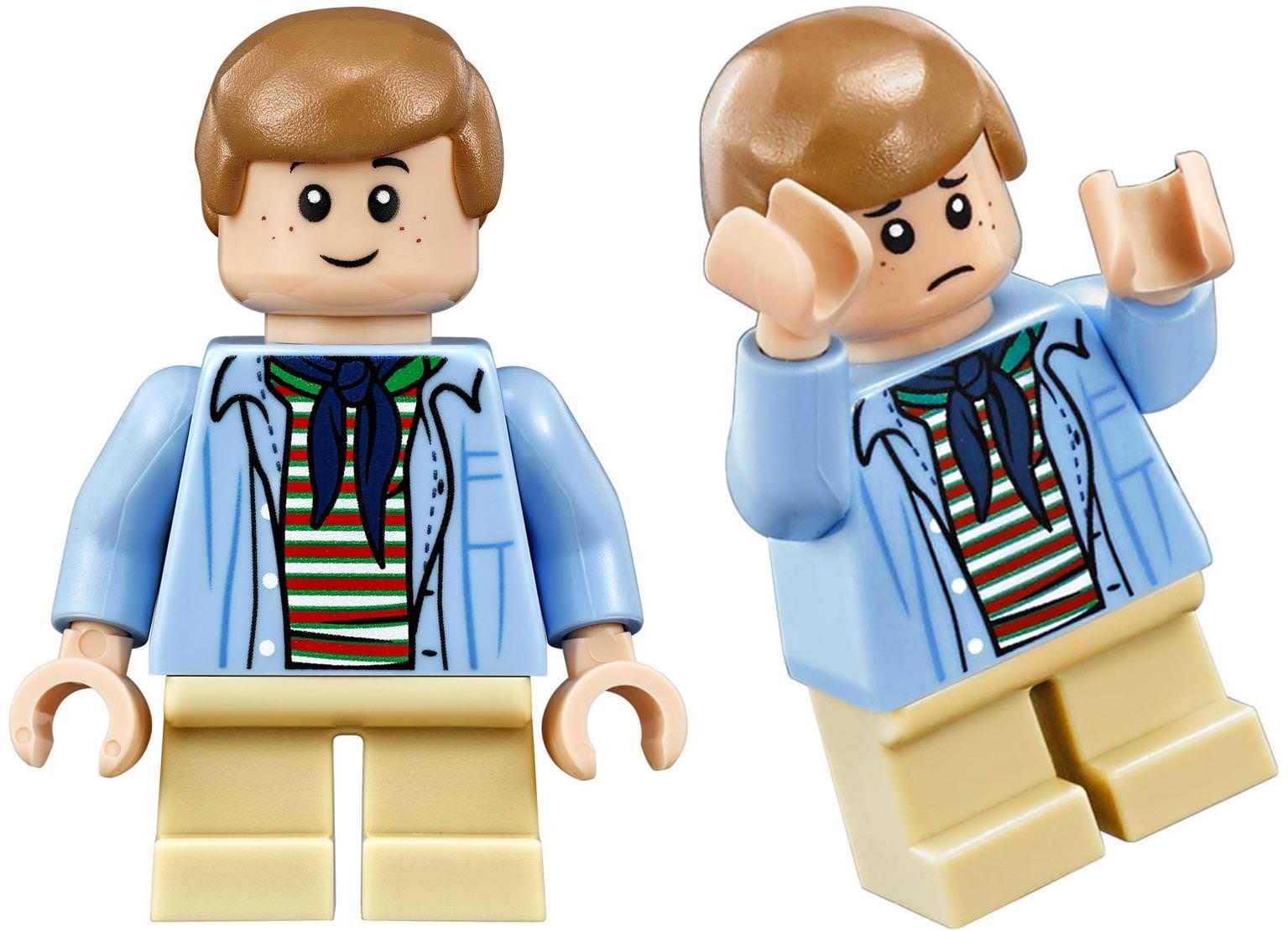 Lastly, we have Tim Murphy. Being siblings, he sports a classic comb over hair piece in the same brown color as his sister. LEGO also gets his outfit just right. He wears a jean blue button-up, green/red/white striped tee, and blue neckerchief. We can see where he gets his style from. Tim has short tan legs and has two face prints. Like his sister, he has one smiley face print and one frowny face print.

The set, of course, also includes a single nougat/dark brown velociraptor to terrorize our heroes. The velociraptor build itself was introduced by LEGO back in 2012 and is again put to great use with this set. From its sunken eyes to its irregularly striped pattern along its backside, this dinosaur’s LEGO form looks fantastic. Its jaw is articulated so you can open the raptor’s mouth or close it. The neck, shoulders, and hips are also moveable for different poses and display dynamics.

The completed build is simply amazing. LEGO creates a set which features three iconic areas in the original, classic Jurassic Park film; the control room, the embryo cold storage area, and the kitchen. See more reviews of other LEGO Jurassic World sets on our website or on the LEGO community website Brick Pals. 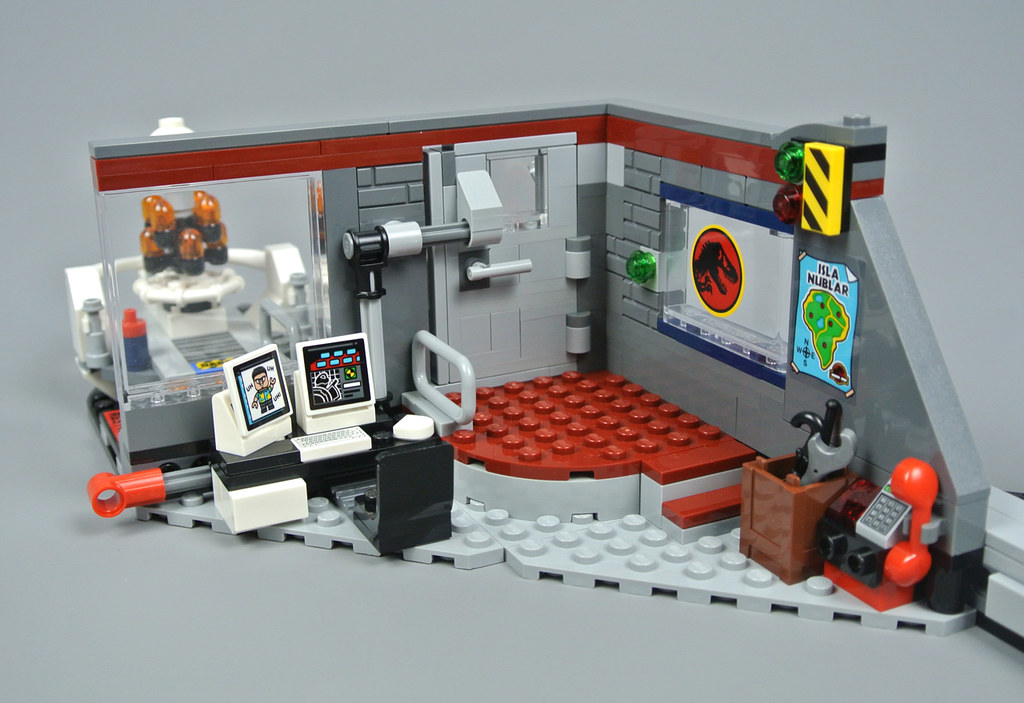 The control room is the largest of the three areas featured in the set. The red emergency phone and escape ladder are great additions to the room, as things get very hectic in the scenes in the room. LEGO also included red and green, round 1×1 pieces up top, along with a black and yellow striped flat piece to highlight on an alarm system for dinosaur emergencies. And why shouldn’t LEGO include a box of useful tools? 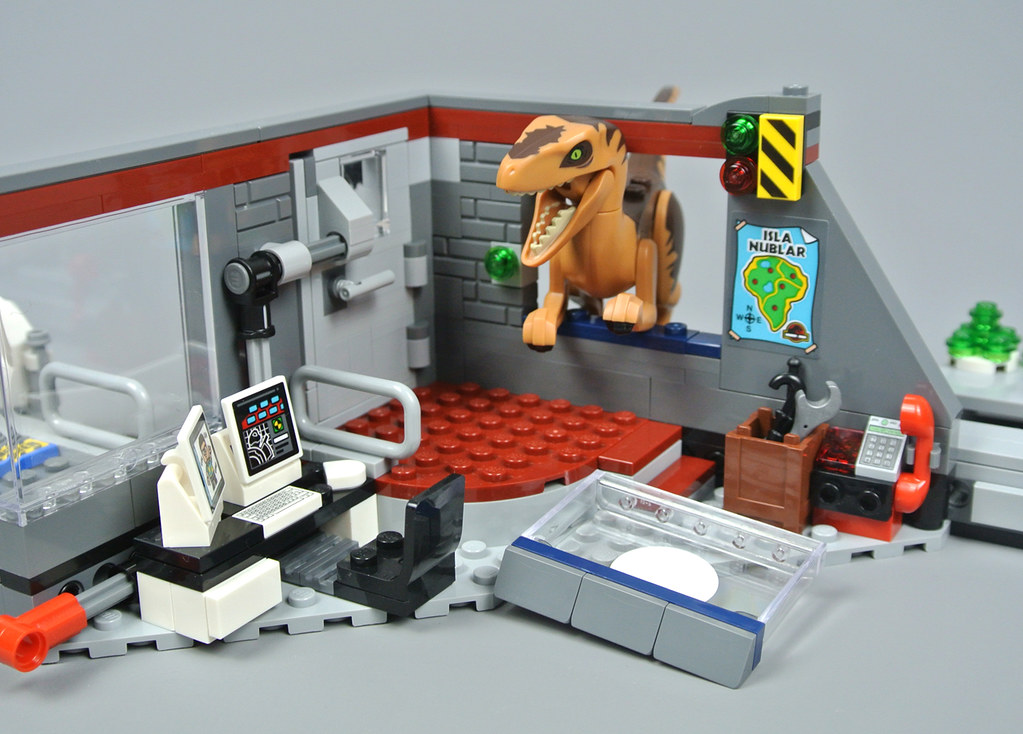 The room also possess a couple of “functional” features. The window on the left wall is designed to come off easily to replicate a velociraptor window smash. And the door to embryo storage room features a functional locking mechanism. One pull on the red Technic level, to the left, and the door unlocks for access. Keep that velociraptor out of there!

But the beauty of the control room lays in LEGO’s smaller details. The map of Isla Nublar is a great nod to the fictional island where the movie is based. LEGO even added Dennis Nedry’s trick Barbasol can, which was where he stored the stolen embryos. Additionally, the hilarious display on Nedry’s computer monitor aligns with the hit 90s blockbuster, and it’s an absolute winner. Somebody call a hacker! 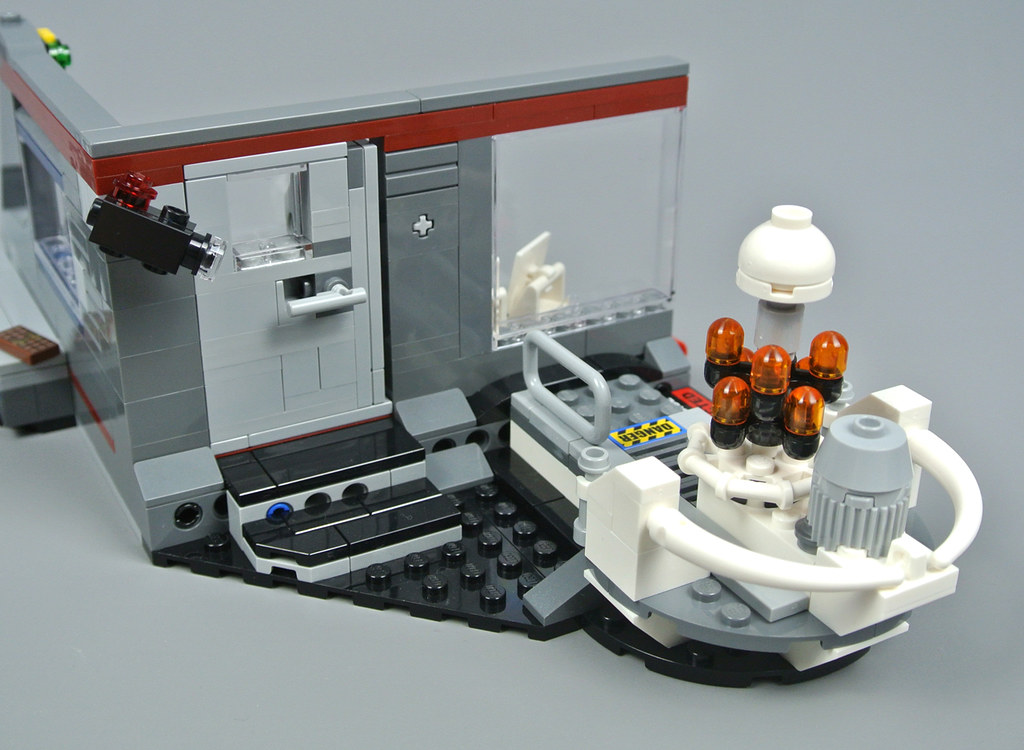 From the control room, a pair of black steps lead down into the embryo cold storage area. At first glance, it’s a great representation of the one in the movie. It’s even visible from the control room, like in the movie. Although the embryo container doesn’t emit blue light like in the film, the transparent-orange round pieces serve well as the actual embryos within the containers. Furthermore, the security camera is a great piece in this area. 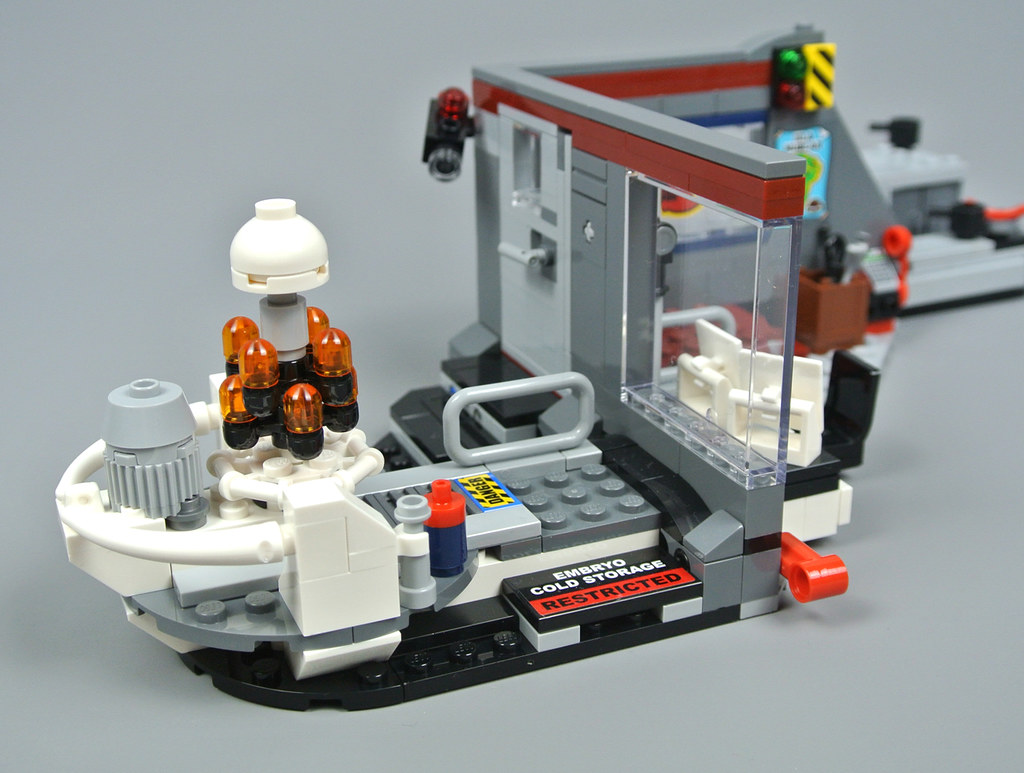 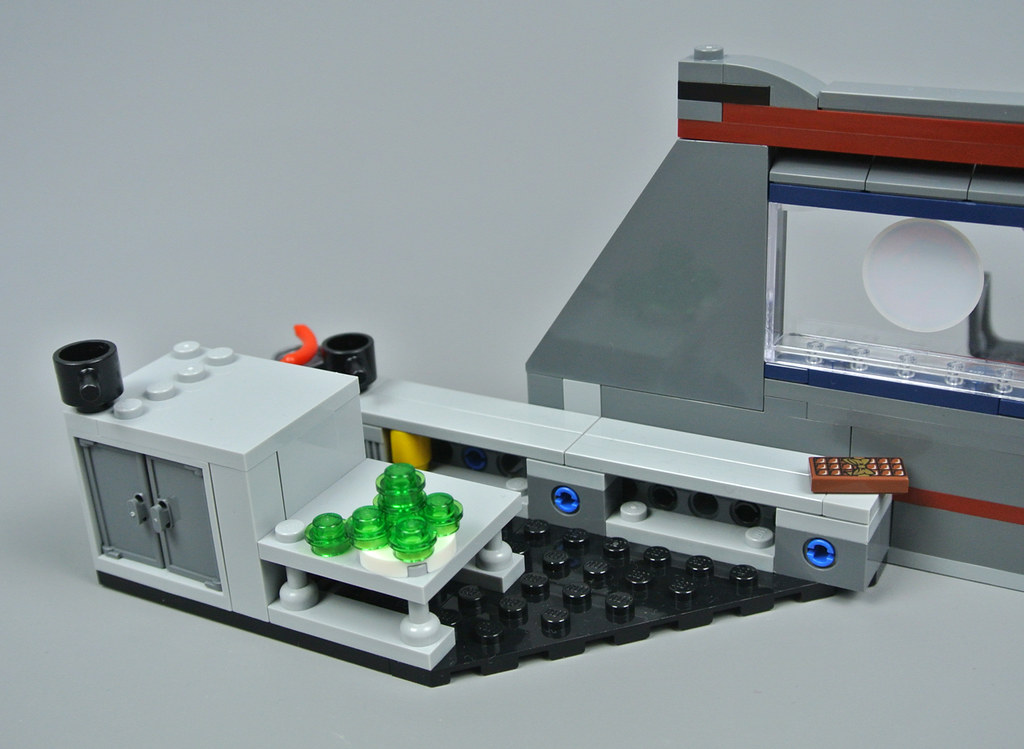 The kitchen is a great addition to this set. It’s small, but it does a solid job setting the scene to the horrifying game of hide-and-go-seek Lex and Tim have with the velociraptors, from the original Jurassic Park. The cafeteria-style kitchen is equipped with pots, pans, and utensils. It also includes some food items such as a wiener, chocolate bar, and several round transparent-green 1×1 to act as gelatin dessert.

The design of the narrow aisles is cute and give a sense of danger when the velociraptor is displayed in the kitchen. And the best part of the kitchen is that you can actually fit Lex or Tim into the kitchen cabinet. So, you can accurately reenact the movie, in LEGO fashion.

In conclusion, we think this set is great. It has playability for the kids, and also has great novelty for adult collectors. LEGO Jurassic Park Velociraptor Chase (75392) is probably the best set out there to sum up the 1993 classic, blockbuster movie in one purchase. Add a jeep and a T-Rex and there you have it. Steven Spielberg would be proud.

What are your thoughts?