When I got home from work the other day, there were a bunch of LEGO Batman Movie books from DK waiting for me to review.  Woo hoo!  I LOVE DK LEGO books!

I’ve always liked books, and I’ll never switch over to digital media.  I love the smell of books.  I love the tactile feel of books.  And these new LEGO Batman Movie books from DK did not disappoint. 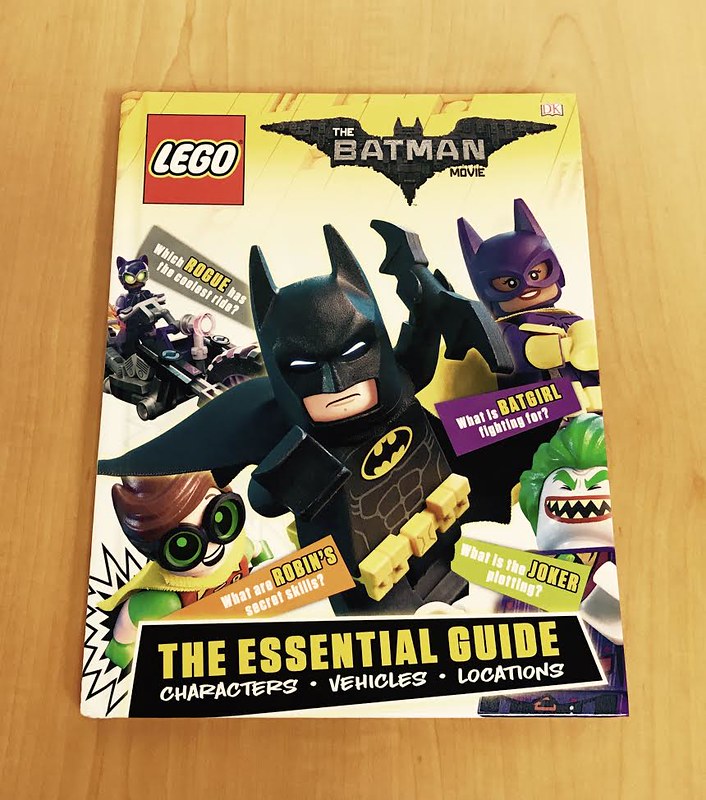 Like all DK LEGO books, the Batman Movie Essential guide is FULL of great pictures.  You get a great sense of what this movie will be about.  I do fear, however, that it might give you too much of an idea.  Because the movie has not come out yet, I can’t be sure, but I think the book may give away some other heroes that may appear in the movie, and possibly some plot points.  Only time will tell! 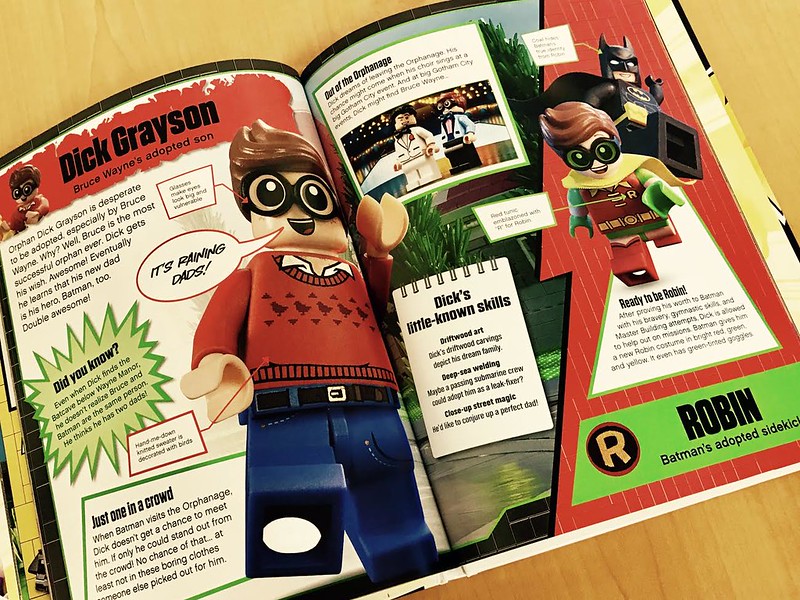 The LEGO Batman Movie Essential Guide lives up to it’s title by giving you detailed information about the all the main characters.  For instance, did you know Robin’s real name is Dick Grayson?  Oh, you did, huh?  Well did you know he likes to carve driftwood art?!? 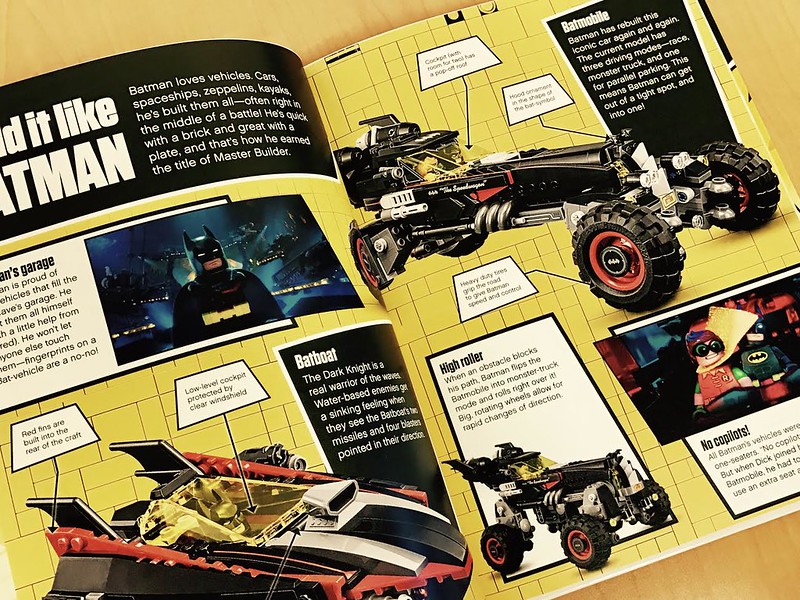 The guide also includes pictures and information about all the vehicles you can expect to see in the movie.  What’s even cooler is all the pictures are of sets you can buy and build yourself! 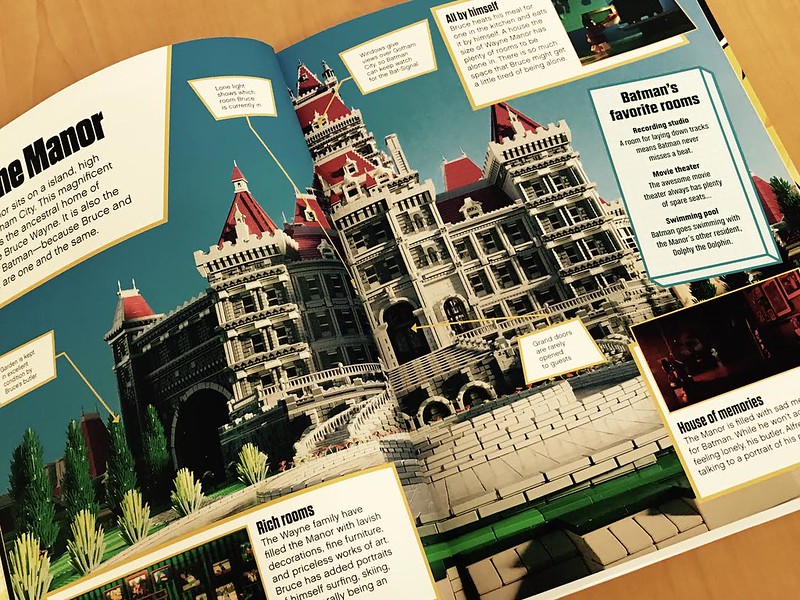 I wonder who the first AFOL will be to build this incredible Wayne Manor model?? 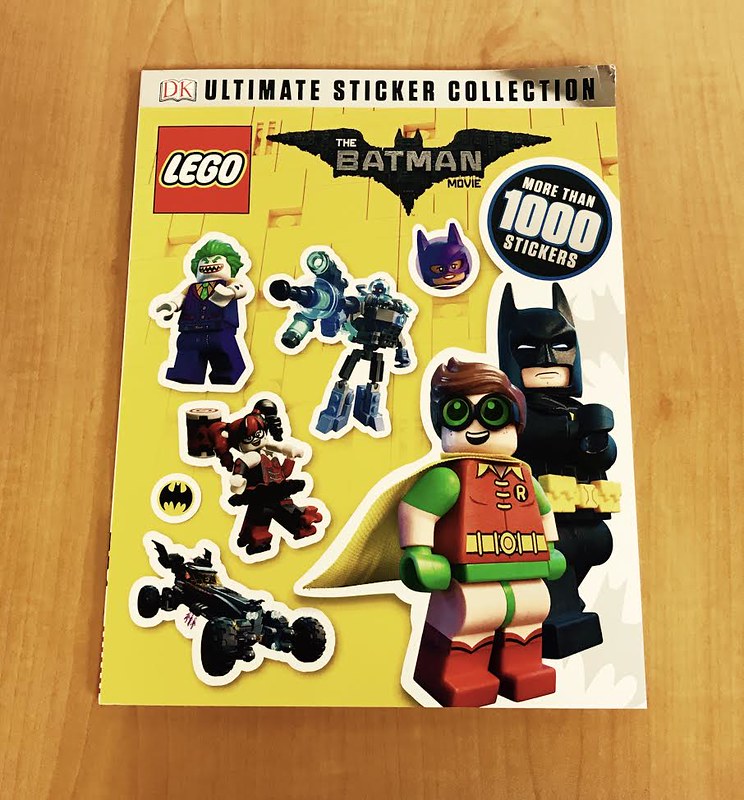 The Ultimate Sticker Collection picks up right where the Essential Guide left off.  It too is full of incredible pictures and over 1000 high quality stickers. 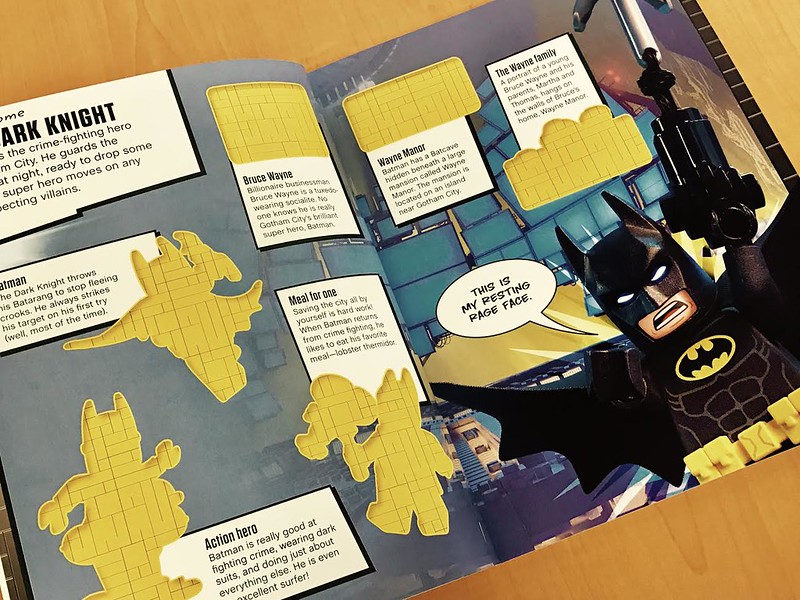 Like other DK sticker books, this one is laid out with silhouettes of pictures that help you find the correct sticker for the space.  The book goes on to tell you all about that particular sticker. 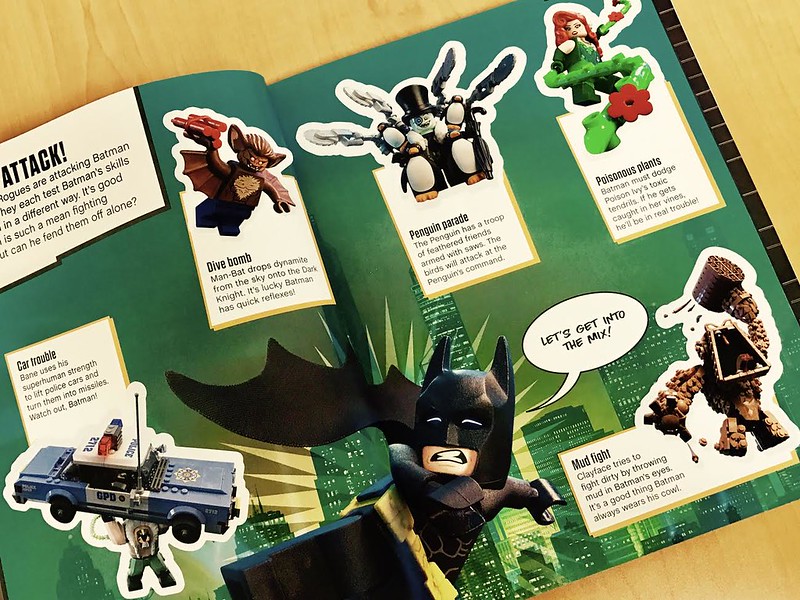 Here you can see what a completed page looks like.  The stickers really add to page!  And they look great.  It is important to note the thick white border around each sticker.  This gives you some room for error when placing the stickers, and will help children place them confidently.  Younger kids should have no problem working on this book themselves. 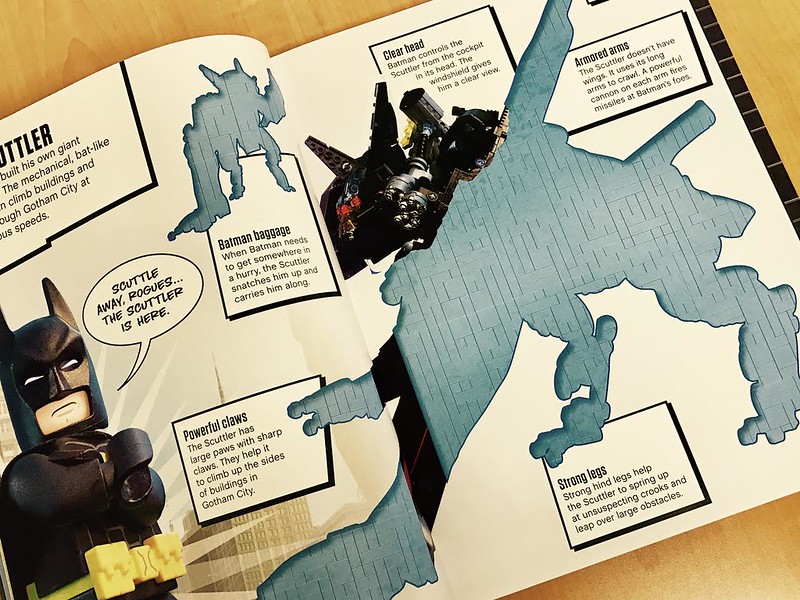 A cool feature I don’t remember seeing in other DK sticker books are these HUGE sticker mosaics.  In the image above, I only put one sticker in place.  You can see how many more stickers I’ll need to find to complete this one! 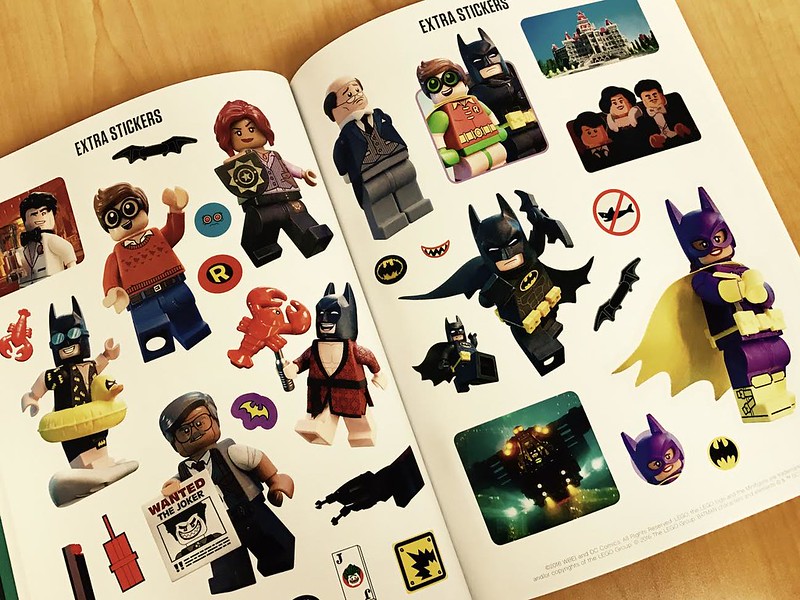 In addition to all the stickers you need to complete the book, it looks like there is another full set of extras you can use however you like!  I believe I will be using these to decorate my laptop, and I’m sure my kids will love these as well. 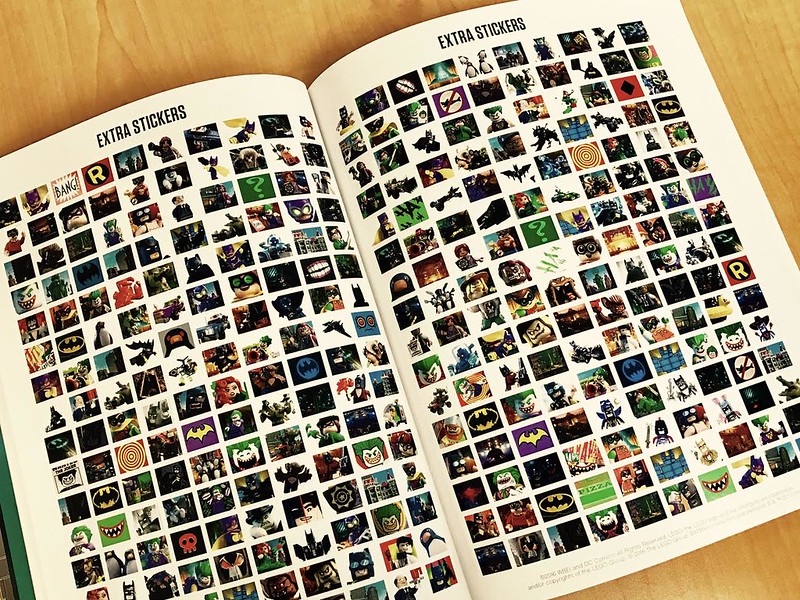 There are also a few page spreads like the one below where you can use the extra stickers to create your own scenes. 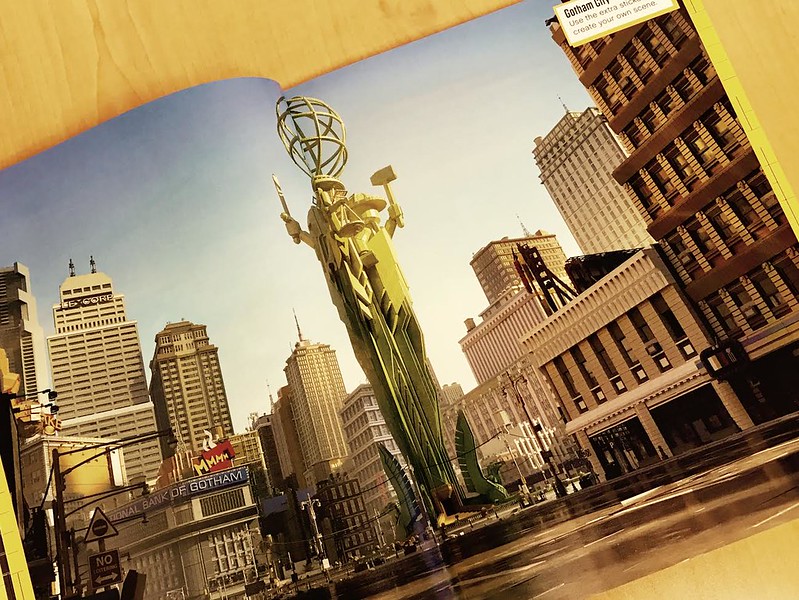 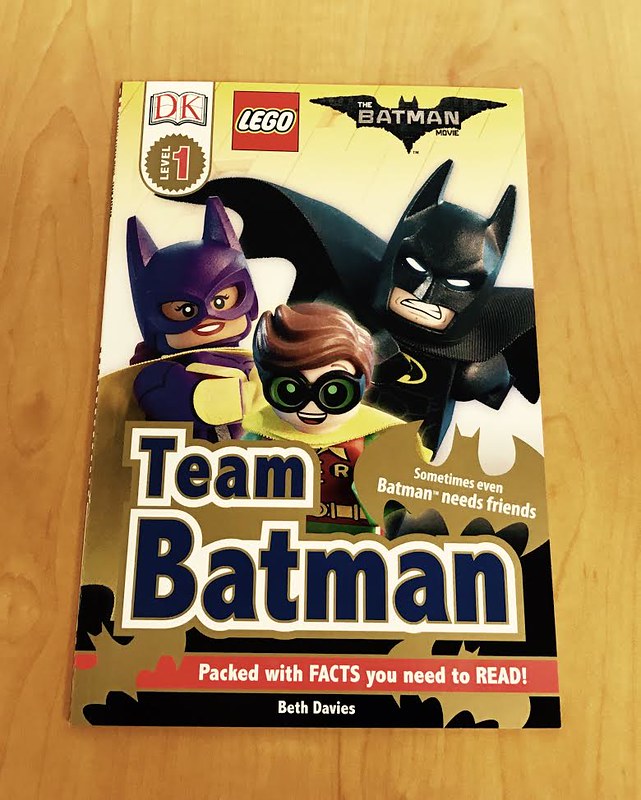 I have not had the opportunity to review an of the previous DK Readers, but I think they’re great.  They are obviously geared to younger children, and there are multiple levels of reading difficulty. 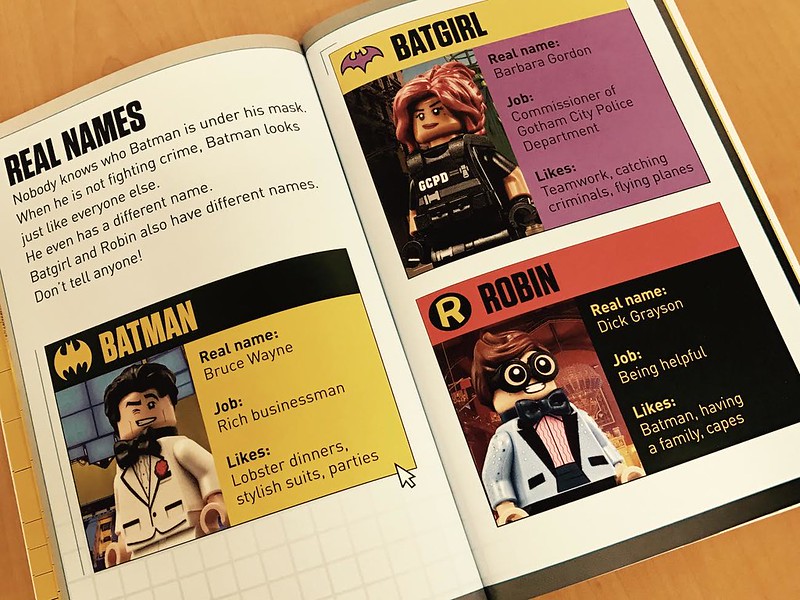 In Team Batman, we are introduced to the main characters through mini profiles. 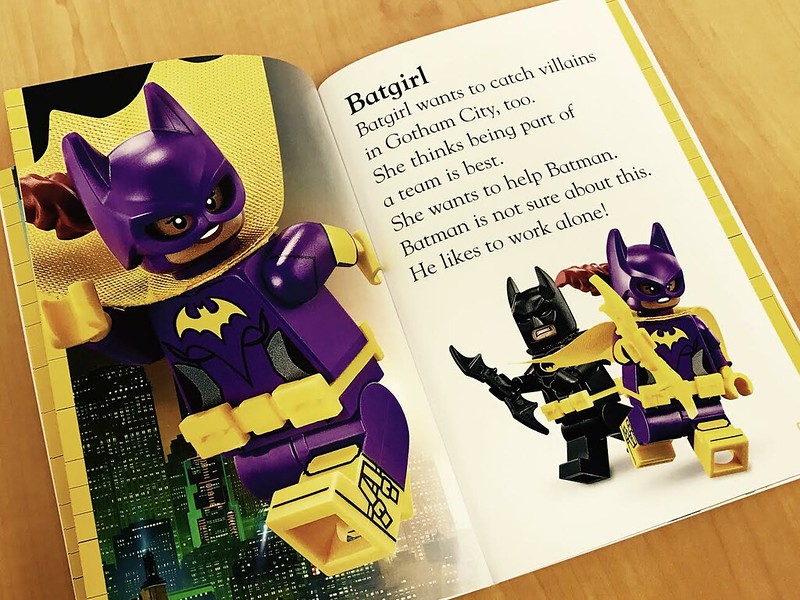 As I expected, these DK books do not disappoint when it comes to beautiful images, just like the ones for older readers.  There is also a fun quiz at the end of each book. 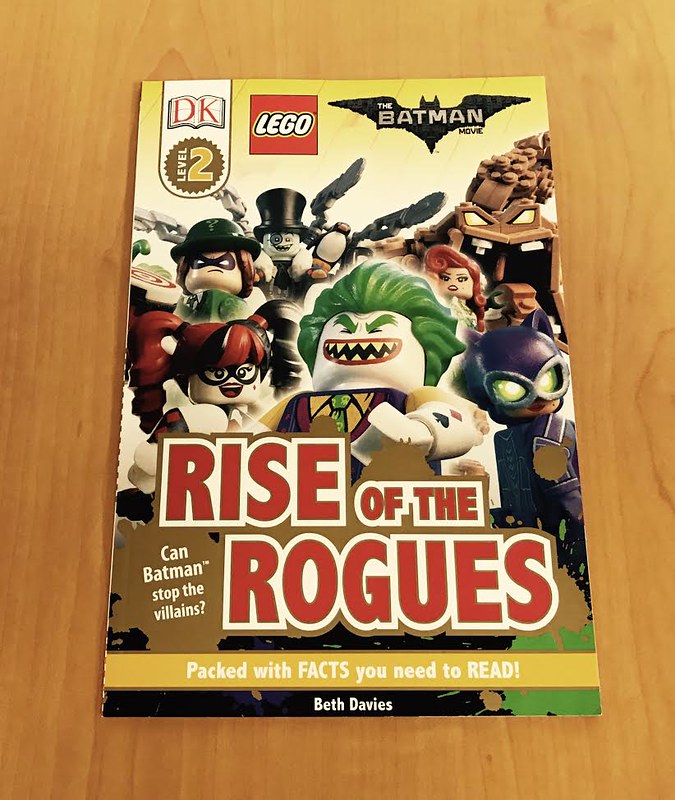 Rise of the Rogues introduces us to the bad guys that Team Batman will be facing off against. 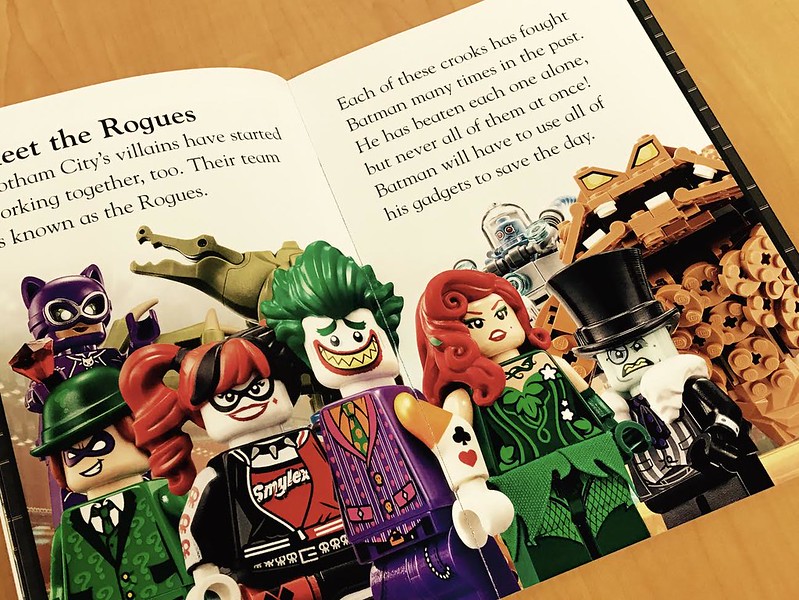 I had no idea the villains of Gotham banded together to form a group called the Rogues. 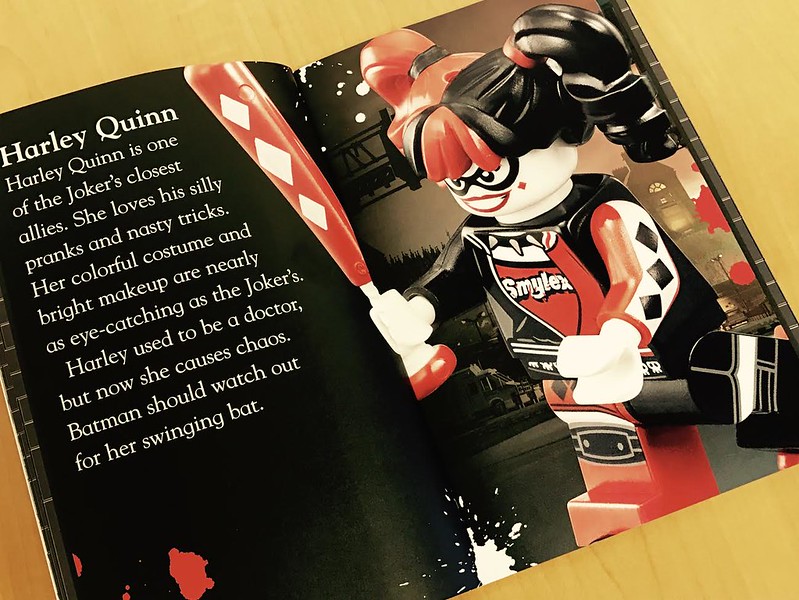 I found the profiles in Rise of the Rogues go a little more in depth on the characters, and give readers a better sense of who they are.

These books also give young readers a taste of things they’ll find as they read more like an index and glossary.  They also have tips for parents to help get their children engaged in reading.

Overall, I really enjoyed these books, and they make me want to see the LEGO Batman Movie even more!  When it was announced that Batman would be the sequel to The LEGO Movie, I was a little bummed.  Not anymore!

In theaters beginning February 10th 2017, LEGO® Batman returns in the highly anticipated release of The LEGO Batman Movie, from Warner Bros. Pictures DC Entertainment and Warner Animation Group, and LEGO System A/S. Fans will see the Caped Crusader face the Super-Villains of Gotham City, while adjusting to being a new dad to adopted son Dick Grayson, aka Robin, trying to work with others, and maybe learning to lighten up.

The LEGO Batman Movie: The Essential Guide offers children and fans insight into the full range of exciting The LEGO Batman Movie sets and minifigures, launching to tie in with the film’s release. The book will also include images from the movie, inviting readers to learn all about their favorite characters and relive the story time and time again. From Robin to Batgirl, this must-have book showcases the Super Heroes from the film, along with facts and trivia on LEGO Batman’s foes including The Joker and Harley Quinn, and information on the film’s exciting vehicles and incredible locations.

In addition to The LEGO Batman Movie: The Essential Guide, children will also be able to create hours of fun with The LEGO Batman Movie: Ultimate Sticker Collection. With more than 1,000 colorful and reusable stickers, fans can create exciting scenes and adventures with their favorite Super Heroes and Super-Villains, with informative captions to guide them.

The LEGO Batman Movie: Team Batman is part of DK’s reading program, available in four levels to help every child progress and become a confident reader.  Aimed at children aged 4+ who are learning to read with support, Team Batman features limited vocabulary and repetition to engage young fans and build their literary skills. Exciting images and photo galleries allow readers to follow Batman and Robin as they save Gotham City from the hands of The Joker.

For children aged 5 + who are beginning to read independently, Rise of the Rogues follows the adventures of LEGO Batman and Robin as they stop The Joker from spreading havoc across Gotham City. As they continue to become more confident and fluent with their reading, young readers will also meet all the new characters from The LEGO Batman Movie.

The LEGO® Batman Movie: The Making of the Movie

Beautifully illustrated with stunning concept artwork, the book tells the story of how The LEGO Batman Movie was made.  Readers are invited to explore each development stage of the movie –from the initial ideas, scripts and storyboards to developing the characters, creating the landscapes brick by brick and recording the dialogue.

Overview spreads detail how each character, vehicle and location was developed, along with striking artwork from each phase of the moviemaking and animation process.

Aimed at LEGO Batman fans aged 12 plus, this unique book has been created in full collaboration with the LEGO Group and Warner Bros. Consumer Products, with exclusive insights from the filmmakers, animators, LEGO designers, actors, cast and crew. The Making of The LEGO Batman Movie is the only book that takes you behind the scenes of the entire The LEGO Batman Movie world in such amazing detail.

About The LEGO Batman Movie

In the irreverent spirit of fun that made The LEGO Movie a worldwide phenomenon, the self-described leading man of that ensemble – LEGO Batman – stars in his own upcoming movie.  From director Adam McKay and the creative team behind the original comes the big-screen animated adventure The LEGO Batman Movie.  Will Arnett reprises his starring role from The LEGO Movie as the voice of LEGO Batman, aka Bruce Wayne; Zach Galifianakis stars as The Joker; Michael Cera as the orphan Dick Grayson; Rosario Dawson as Barbara Gordon; and Ralph Fiennes as Alfred.

The LEGO Batman Movie is produced by Dan Lin, Phil Lord, Christopher Miller, and Roy Lee, who worked together on The LEGO Movie.  The screenplay is by Seth Grahame-Smith and Chris McKenna & Erik Sommers and Jared Stern & John Whittington, story by Seth Grahame-Smith, based on LEGO Construction Toys and based on characters from DC Entertainment.  Batman created by Bob Kane with Bill Finger; Superman created by Jerry Siegel and Joe Shuster. Jill Wilfert, Matthew Ashton, Will Allegra and Brad Lewis serve as executive producers.

THE LEGO BATMAN MOVIE © & ™ DC Comics, Warner Bros. Entertainment Inc., & The LEGO Group.  All Rights Reserved. (s17).  LEGO, the LEGO logo, the Minifigure and the Brick and Knob configurations are trademarks and/or copyrights of The LEGO Group. © 2017 The LEGO Group. Used with permission. All rights reserved.

About the LEGO Group

The LEGO Group is a privately held, family-owned company with headquarters in Billund, Denmark, and main offices in Enfield, USA, London, UK, Shanghai, China, and Singapore. Founded in 1932 by Ole Kirk Kristiansen, and based on the iconic LEGO® brick, it is one of the world’s leading manufacturers of play materials.

Guided by the company spirit: “Only the best is good enough”, the company is committed to the development of children and aims to inspire and develop the builders of tomorrow through creative play and learning. LEGO products are sold worldwide and can be virtually explored at www.LEGO.com.

For more news from the LEGO Group, information about our financial performance and responsibility engagement, please visit http://www.LEGO.com/aboutus.

Warner Bros. Consumer Products, a Warner Bros. Entertainment Company, is one of the leading licensing and retail merchandising organizations in the world.

DC Entertainment, home to iconic brands DC (Superman, Batman, Green Lantern, Wonder Woman, The Flash, etc.), Vertigo (Sandman, Fables, etc.) and MAD, is the creative division charged with strategically integrating across Warner Bros. and Time Warner.  DC Entertainment works in concert with many key Warner Bros. divisions to unleash its stories and characters across all media, including but not limited to film, television, consumer products, home entertainment, and interactive games.  Publishing thousands of comic books, graphic novels and magazines each year, DC Entertainment is one of the largest English-language publishers of comics in the world.